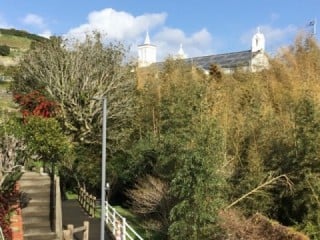 Bamboo grove along the Shitsu Church 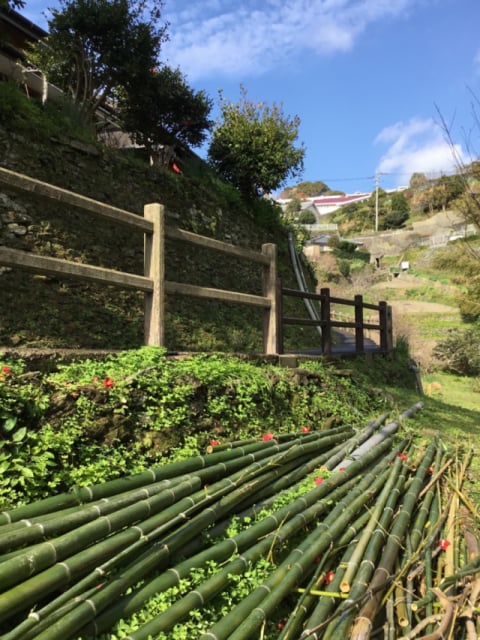 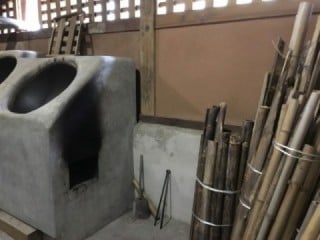 Go to the tea pot as a bowl
It will be fine on Saturday, January 1th.At 19 am, Ito En, Nagasaki and Sasebo branch offices of tea gathered for cleaning volunteers.They are usually younger brothers who take care of drink vending machines. 9 people including 14 staff members, 4 children, and 2 people from the World Heritage Division of Nagasaki Prefecture.
The bamboo grove along the road from the rescue center to the Izutsu church was quite thick, so this year we will organize the bamboo grove.
Cut the bamboo that has risen in the field, drop the branches, and cut it into small pieces to make firewood.The dead bamboo is also pulled out and the branches are dropped to make it firewood.Saw, Nata, sickle.I was able to quickly use tools that normally have no edges, and I cut off the shrubs to create a neat finish.We have a lot of firewood, so we asked them to stack it outside with the tea roasting pot to prepare for this year's tea roasting, which is also safe this year.
Lunch is curry.I was very pleased that it was delicious, but I didn't have enough rice.I regret that I should cook more next time.Another reflection, I forgot to take a picture again.I'm sorry I couldn't introduce you to your male figure.
He promised me with a smile, "Next year!" 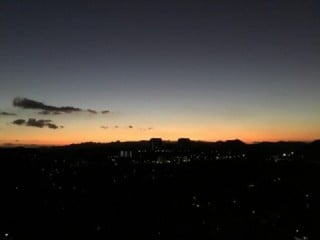 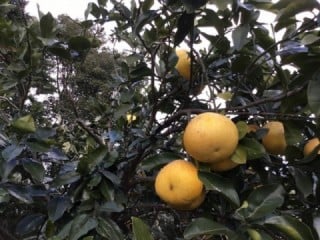 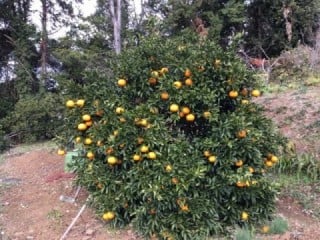 Hachiman
Happy New Year, everyone.
Gentle and full of sun, Nagasaki has opened the new year.
Although my greeting was delayed, I spent the year-end and New Year holidays in Sasebo.I'm a sister, so it's for prayer training.However, it's like a holiday, and I have to prepare three meals (of course I got a new year's meal) and spend the days praying in the warm cathedral and in my room.I refreshed my mind and body and got to work.
At dawn in Sasebo, the rising sun rises from a small residential area.I met a very beautiful dawn.The prayer house where I stayed had many plum trees, and I squinted at the few flowers that bloomed.Many tangerine trees are also planted, and the large pomelo is eye-catching.Hassaku seems to be fruitful and happy!It took a little more days to taste, which was a shame.
The rescue center is immediately crowded with visitors who took advantage of the winter vacation.May you enjoy the love of De Rot and God again this year. 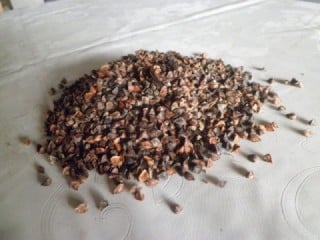 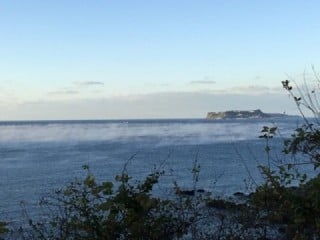 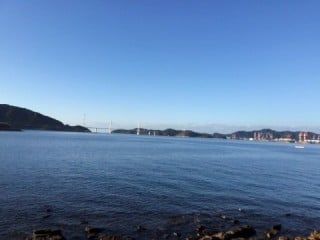 Oshima Dog and Oshima Bridge
We are approaching the end of the year.I'm sure everyone is busy.
The harvested buckwheat has become powder.It was a pity that there were few actual results this year, probably because of the typhoon.Even so, I left it at a rice mill to make it into powder, and when I was informed that it was finished, I went to pick it up.I will go to a rice mill in Saikai City for an hour.I went out early before work, but the first frost was falling, the rice fields were pure white, and the sea was steaming like steam.The coal mine island Ikeshima was also floating in the steam.
"I'm sorry to grind ..." said the uncle.The larger of the two types requested did not bite into the machine and it was difficult to make it into powder. "I will not accept it even if I bring it from the next time," said the uncle with a smiling smile.I promised to be the smaller one from the next time.I will go home while looking at the Oshima dog and Ohashi, and buy a cheap delicious Saikai mandarin orange at the roadside station.Nakaura, the birthplace of Julian Nakaura, one of the Tensho embassies, will also pass.
The 13k finished buckwheat flour is in the hands of those who are waiting immediately ...Hoping for a good harvest next year. 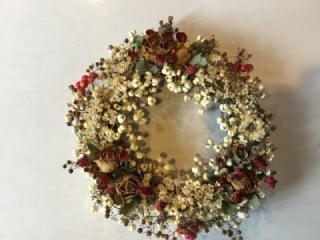 Based on peanut seed and leek husk 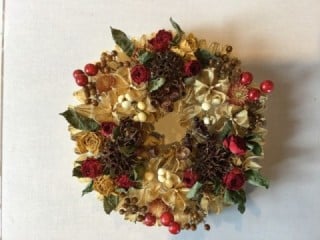 Bleach the husk shell and use it as a foundation 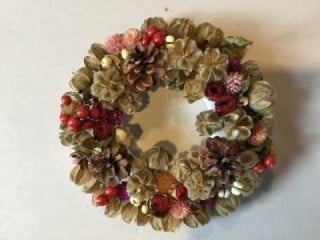 The shell of the cocoon is freshly picked from the base tree
Three people participated in the lease making experience on December 12, and each completed a beautiful and unique lease and brought it home.I intended to introduce the situation, but I skipped shooting.The people who visited the tour the next day liked the sample made and bought it by all means, so we are uploading the newly made one.
It's as simple as inserting dried flowers and plants into a styrofoam or stringed base.But isn't it pretty nice?Would you like to give it a try? 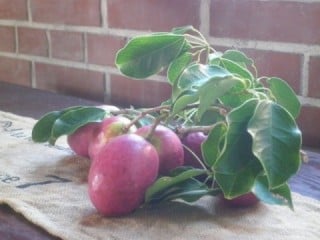 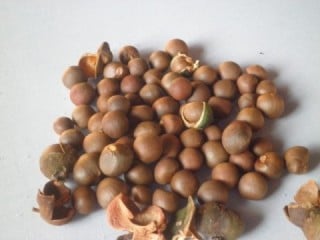 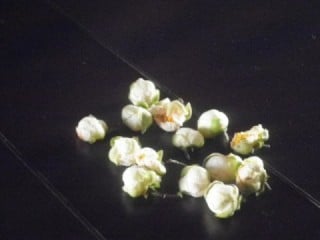 Tea flower
November 11th (Sun) Fine weather!25 people gathered for the potato digging experience.From infants to the elderly, we dug lively potatoes.Roasted sweet potatoes baked at the same time as digging.I am delighted to have a hot feeling!
I also studied masonry after receiving an explanation from Mr. Nakano, the chief of the World Heritage Promotion Office, about the site of a work place that was built by Mr. De Rot and is now abandoned.It was an interesting study because it was prepared for research so I could understand the state of masonry well.
The long-awaited soup.Instead of the dago soup, the soup with a lot of noodles and vegetables called "Hikado" was served, and it was delicious enough to be refilled.
Much earlier than the scheduled time, it ended before 12 o'clock, and I went home by bus and on foot (some people walk with my family).Of course, with the dug potatoes!
I couldn't give you a picture of potato digging.I brought a camera, so I took a lot of pictures, but when I tried to see it, the memory was stuck in my computer.Ah ... I've done it again.
The photo given is Gube (standard language is Mube).I got it from a neighbor.Many people said that they were nostalgic when they were decorated, so I gave them to each of them.Along with the conservation plan for the tea seeds and the workshop, a field for de Rotation has been developed, but it is planned to become a tea field, and some of the native seeds that are currently growing will be planted, so seedlings. Collected for making.We are starting to sow the pots.Ocha no Hana is being dried to try making herbal tea of ​​dried tea flowers, introduced by Mr. Higashisaka, a Japanese tea instructor.It's effective for rhinitis ...I hope it will be beautifully finished!
最初7 8 9 10 11 12 13 14 15At last
Former Shitsu Aid Center
● Opening hours
Tue-Sat: 9: 00-17: 00
Sun: 11: 00-17: 00
(Final reception 16: 30)
● Closed days
Monday (in the case of a holiday, the next day)
For details, click here
2696-1, Nishishitsu-machi, Nagasaki-shi
TEL 0959-25-1002
FAX 0959-25-1006