Present 2 Honey
Cotton flowers have bloomed.There was a person who delivered the seedlings, and the ones that were planted in large pots were getting bigger.I had a cute triangular one, but I was interested in it as much as a bud. On the 12th, I went to work and found that one flower was in bloom!The yellow petals and the maroon color inside are impressive.Above all, the calyx and buds are unique and cute.Mr. de Rotz planted cotton to make cotton fabric, so why not plant it?It was a seedling that gave me.I am looking forward to seeing how many flowers will bloom and what kind of cotton will be produced.
In the hot weather, I received a wonderful gift.The watermelon was raised and delivered by Mr. K.Last year, the watermelons made at the rescue hospital were delicious, so I sown the seeds I ate in the spring and raised them.Surprised!It was delivered from Saga.I cut one and had it together, chatted for a while and went home, but next year I will plant this seed at the rescue clinic.In fact, the watermelon seedlings I mentioned earlier on my blog have died.Was good!
The other is honey.Honey caught in the nest of Japanese honeybees in the Yukou field that is rented out.I got a share.How would you like delicious honey?
I started Twitter at De Rot's house.Please take a look. 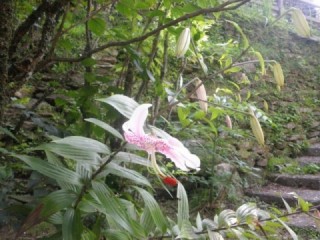 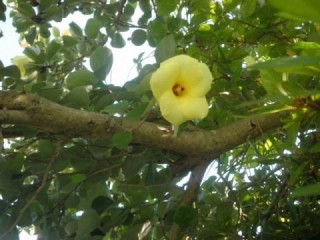 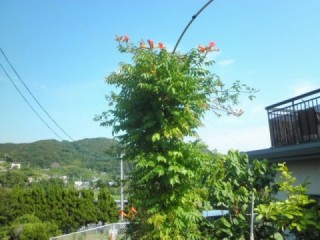 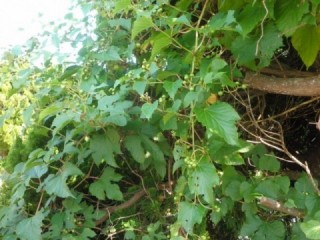 The grapes are still blue 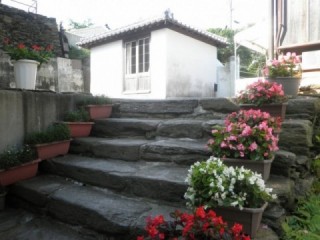 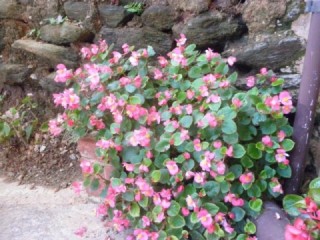 From begonia spilled seeds to wonderful
The rainy season is unprecedentedly comfortable with a refreshing breeze.Looking around during the rainy season, Hamabou is in full bloom.I put a lot of flowers on the sloping road of commuting and the thick shrubs.Behind the Father de Rotz Memorial Hall, Kanoko Yuri approached to see and was greeted by a horde of mosquitoes ...There are many seasonal flowers and plants around the rescue center!If you are vague, you will miss each season.The familiar Begonia of the Rescue Center is also in full bloom.When I went up to work, the tiger lily of the tiger lily stretched out from the thick grass and opened.
Healing and joy in plants ... We receive various things.I thought it was a waste to miss the season because I was too caught up in the daily flow, while looking at the fresh blue fruits of the wild grapes.I want to enjoy the good things that God prepares from time to time.Let's stop tweeting!
Tiger lily's cheeks don't bloom
Tickled by the incense of the gardenia
When Father's Day passed, the scent of gardenia jasminoides from my neighborhood reminded me of my late father.It was my favorite flower.
(Sr red)

A lot of baby medals!

Can you see it?

Blackberry, it will soon be colored
I have several red medaka in the yard of the rescue center. From around the end of May, the spawning season has begun, and the birth rush of baby killifish continues.If you do not transfer the eggs laid on the aquatic plants to another container, the parents will mistake them for food, so they will be born in the washbasin.Mr. T from the Father de Rotz Memorial Hall is a veteran in distinguishing eggs.A great number of fry are growing. About 5 of them were taken to Mr. T's aquarium.
Watermelons and blackberries are also growing in the garden fields.Please take a look. (Sr Aka)

The planter was very cramped!
Finally rain!It's late and late rainy season.
The tea tree saplings were also waiting for the rain.I feel relieved.
By the way, today I would like to introduce another topic of tea seedlings.
Sister H and Sister S are curious to learn that there is also a way to make native seeds from seeds for tea seedlings.I sowed seeds at the end of last year.Of course, it's the tea fruit of Udera. I was watching the situation with half a chill, saying, "That's easy ...", but it sprouted wonderfully cute buds and grew steadily.The sprouted planter was full and Sister S decided to transplant.
Transplanting over three days, the first day was sweaty in the heat and sunshine, and the second day was soaked in the rain. The third day was cloudy and fair, but the trouble was that the mulch holes were gone.Not Sister S giving up here.I took the grass from the field that had been ruined and planted it with mulch.I finished planting it after noon. There were more than 3!
Even the sprout from the seed is amazing, but Sister's amazing power of action.I hope you will survive the sunshine in summer and the dry season in autumn and winter.

Sprout of spring The fruitful spring ... 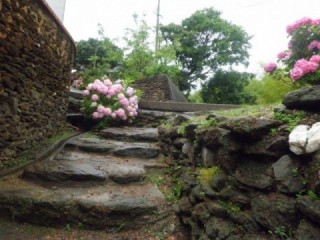 Hydrangea in the rain 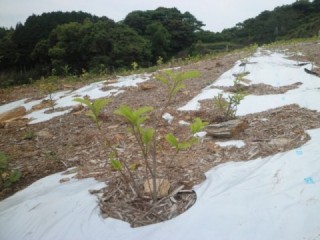 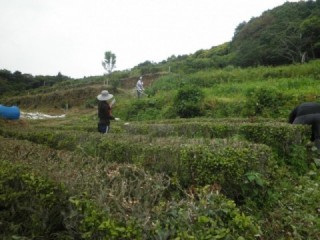 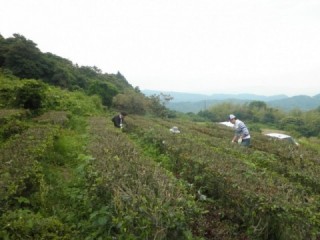 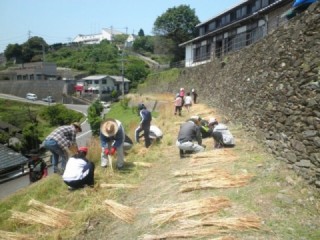 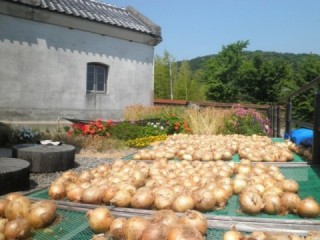 Onions and good harvest!
I haven't heard about it.Even though the topic is full ...
rain!became.You can hear the "hot sigh" of hydrangea.The rainy season is still in Nagasaki.
A lot of sprouts were attached to the tea seedlings that we all planted in March.I got fertilizer and am growing up again.I was worried that the leaves that were attached to the plant would fall off one after another, and the tea farmer said, "3% will die." Growing up.
The tea trees in the tea plantation were poorly harvested this year and were not picked very much.There seem to be various causes, but because it is old, the tea farmer of Sonogi tea cut it.Immediately after that, I received an application for volunteering and had them mow the grass around the tea tree.Four people from Nikko Securities. The three have just arrived in Nagasaki in April and May.It's the first time for me to hold a sickle because I call myself a city boy. I was surprised and laughed at the words, "I'm afraid of flying grasshoppers," but as expected, young people and even mowers started to operate, and the tea plantations became cleaner.
The harvest was one after another.
In the autumn of wheat, the 5th and 6th graders of Sotokai Higashi Elementary School came to harvest the wheat that had grown under the rescue hospital.I enjoyed cutting with a sickle, struggled, and it was difficult to bundle it for drying, so I worked with volunteers to teach me how to cut it in about an hour.It was in the morning, but on a hot day, I sweated a lot, but I thought about cooking with this powder and went back to school.Udera's wheat is also a good harvest, and it is also milled at a high-level rice mill and returned to powder.
The onions raised by the volunteers of Udera were also a good harvest.It's hard to get it wet, so it's a bit jarring, but it's blessed with fine weather, and it's a nice dry onion.I had you pick it up at the elderly home immediately.
In nature, I have a hard time getting angry and using my body, but I get a crush on my growth and I am happy with the fruits. (Sr Aka)
最初4 5 6 7 8 9 10 11 12At last
Former Shitsu Aid Center
● Opening hours
Tue-Sat: 9: 00-17: 00
Sun: 11: 00-17: 00
(Final reception 16: 30)
● Closed days
Monday (in the case of a holiday, the next day)
For details, click here
2696-1, Nishishitsu-machi, Nagasaki-shi
TEL 0959-25-1002
FAX 0959-25-1006